Nida Forum “Tear Down This Wall” 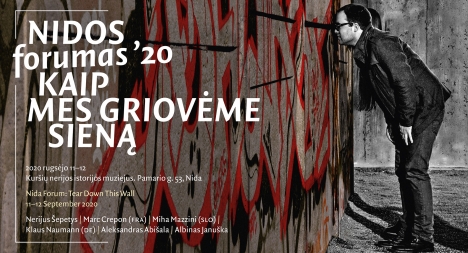 Tear Down This Wall

Already at the first Nida Forum, devoted to what we called “The Migraine of Europe”, it became

apparent that, among other European problems, a very significant part is played by the wall, the

building permit for which was issued at Potsdam and Yalta, and which was installed from the Baltic

to the Black Sea. The second Nida Forum was dedicated to discussing the significance of such

division of Europe to the nations and states on either side of the wall.

But three decades ago, the nations of Eastern and Central Europe managed to tear down that wall.

It was a time of great events, great hopes and great illusions. The western part of Europe became

hopeful that the Cold War (if not history itself) is now over, and an almost eternal peace became

the dream. It seems like this hope was an illusion. East of the former wall, the dreams were that

freedom. Illusions abound there too. One way or another, those were events and processes that

doubtlessly affected the whole of the further development of Europe. We invite you to discuss

them at the third Nida Forum, which again takes place in the background of great challenges: the