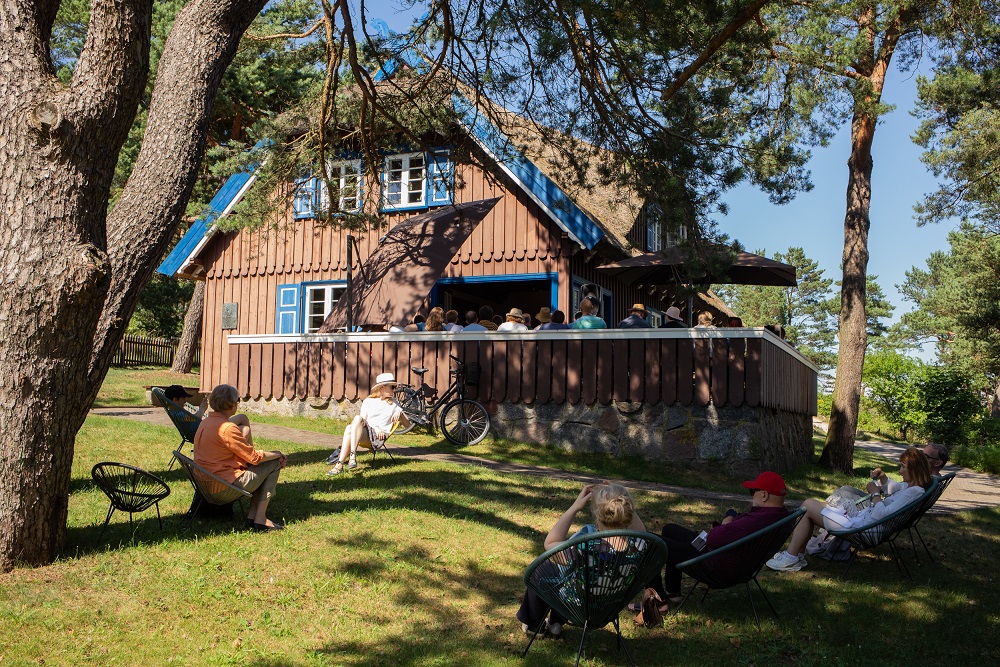 This Saturday, 9 July, the XXVI International Thomas Mann Festival begins in Nida, offering a week-long cultural programme for the resort’s guests and community. Concerts, exhibitions, film screenings and intellectual discussions are linked this year by the theme of neighbourhood. The programme will focus on the war in Ukraine.

“After a more subdued pandemic period, the festival will once again be in full swing, with a wide range of guests and genres. It is extremely painful that, as cultural life returns to normal, one of the main issues this year is the war that Russia has started in Ukraine. However, as witnesses of these tragic events, we are ready to address this issue, expanding public understanding of the ongoing geopolitical processes and their implications for our future and that of Europe as a whole,” said historian Dr. Lina Motuzienė, Director of the Thomas Mann Cultural Centre, which is organising the event.

The festival will traditionally open with the Genesis Concert on Saturday 9 July at the Evangelical Lutheran Church of Nida. This year’s music programme will feature an important role for musicians from the port city, with the Klaipėda Chamber Orchestra, under the direction of Mindaugas Bačkaus, and baritone soloist Romanas Kudriašovas, performing compositions by Edward Elgar, Ralph Vaughan-Williams, and Benjamin Britten.

The music programme also includes meetings with the Klaipėda Choir Aukuras (artistic director Alfonsas Vildžiūnas) and violinist Konradas Levickias, cellist Kornelija Kupšyte and pianist Lauryna Lankutyte, the Kaunas Quartet, which is working on an original programme to recreate the atmosphere of the Artists’ Salon of the Hermann Blode Hotel, and pianist Daumantas Kirilauskas, tenor Ilker Arcayürek (Austria) and pianist Simon Lepper (Great Britain), pianist Violeta Tamašauskaite-Coutaz and harpsichordist Balys Vaitkus, pianists of the younger generation – Gabriele Agile Bajoraite and Jonas Benjamin Balsis, and in the final concert of the festival, an impromptu brass band of musicians from Lithuania and abroad. The concerts at Nida Evangelical Lutheran Church will feature a wide range of compositions, from European classics to the most prominent Lithuanian academic names.

The festival’s chosen theme of neighbourhood will be explored from various angles in the events of the oral programme. On this occasion, Th. The Mann Memorial Museum will host Ukrainian intellectuals: the film director Serhiy Loznitsa, who will also present his documentary Maidan (2014), and the writer and philosopher Yaroslav Melnik. Egidijus Aleksandravičius, Vygantas Vareikis, Eduard Mühle and others will discuss the specifics of communal coexistence, migration and the Eastern European neighbourhood.

The film programme, organised in cooperation with the Goethe Institute in Vilnius, will also include a screening of the 2016 film Mariupol by Lithuanian anthropologist and filmmaker Mantas Kvedaravičius, who died in Ukraine this year, with the participation of the Ukrainian heroine, as well as films by German and Polish artists.

The art programme will include an exhibition of Ukrainian artist Valentynas Odnovyunas, who works in Lithuania, at the Curonian Spit History Museum, and the presentation of the interdisciplinary project “Being” by Egle Čėjauskaitė-Gintalė (jewellery), Martynas Gintalas (videography), Laura Budreckytė (vocals) and Vytis Nivinskas (double bass) at the V. and K. Mizgirias Artists’ House and the opening of the international group exhibition “Sweet Dream Foundation”, which explores being in the face of war and stability, at the Nida Art Colony of the Vilnius Academy of Arts.

On 16 July, the date of Thomas Mann’s arrival in Nida, commemorated by the festival as the day of his friendship, there will be the publication of the German publicist Kerstin Holzer’s book “Monascella. Monika Mann und ihr Leben auf Capri” (“Monika Mann and her life on Capri”), about one of the writer’s daughters. The author became famous in Germany for her bestselling book about another Nida summer house guest, Th. Mann’s daughter Elisabeth Mann Borgese.

The festival will also include a presentation of Th. Mann’s works and a meeting with the winners of this year’s traditional essay competition.

To find out more about the festival programme and to buy tickets, visit www.mann.lt.

Th. The activities of the Mann Cultural Centre are funded by the Lithuanian Council for Culture.